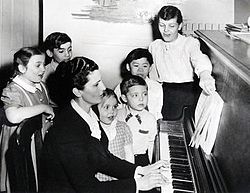 A Piano for the Children

I found the children’s home off of Germantown Avenue in Philadelphia. Cunningham Piano sent me there to evaluate an old upright. The building was in a neighborhood that was way past run down and well into depressed. That part of Philadelphia is filled with large old houses and many of them are abandoned. The original owners had died or just walked away. The children’s home was housed in one of those buildings. Donations had paid for upgrades to the heating and the installation of better lighting. But, for the most part, the building looked and smelled tired.

I was taken into the room and opened the instrument. It was a mess. Some of the keys wouldn’t play at all while others would stick or respond badly. I felt the strings and the rust was thick on them. I knew what would happen if I tried to tune this old monster. The lady at Cunningham had asked me personally to do what I could. “They don’t have any money, John. Do the best you can and we won’t worry about the charges.”

I spent two hours trying to restore the broken keys and loosen the ones which had become frozen due to swelling of the wood. But the harder I tried, the worse things became.

Finally, I asked to use a phone and called the manager at Cunningham. “Rose, it’s hopeless. The piano is just too far gone to expect any real improvement. I feel terrible about it but I’m going to recommend that the piano be thrown away. If you would like, you can send another technician here but I doubt that it would make a difference.” Rose wasn’t happy to hear my report. Surprisingly, the director didn’t seem to mind. “I didn’t hold much hope for that thing. It was a donation anyhow. I hate to say it but we get things here all of the time that are way past their usefulness.”

I packed up my tools and left feeling really sad. But there wasn’t much I could do, not for that old wreck.

About a week later, I visited another house. This one was in Chestnut Hill, a Philadelphia suburb. The owner had just purchased a new piano for his daughter. Elizabeth was her name. The man played a recording of her playing their old upright. At that time, she was about eleven. Rather than do the things other girls her age did, Elizabeth wanted nothing more than to play. She taught herself new tunes and would sit for hours, practicing until she produced the song perfectly. I smiled. “She’s really good, Sir. I can understand why you made the investment in a new instrument for her. By the way, where is the old upright she was using?” The man laughed. “It’s right over here, taking up far too much room. As a matter of fact, I was going to ask you what we could do with it.”

When I finished tuning the new piano, I asked if I could look at the old upright. The man led me over to it. It was a mirror piano. About fifty years ago, someone got the idea of creating mirrored panels which were designed to cover the wood of an older upright. There was a large rectangular mirror which went right across the front of the instrument above the keys. The top of the unit had been cut back a bit and a nice wooden shelf was mounted there. Right in front of the tuning pins, was a second mirror. This one ran across the width of the piano. It was an effort to make one of those big old uprights look more attractive.

I sat down and played the older piano. The sound was great and the keys worked quite well. After testing the instrument for a few minutes, I removed the front panel and examined the action and the strings. I turned to the owner. “Are you interested in selling this piano?” He laughed. “I doubt anyone would buy it. The thing is far too big to begin with and those mirrors just make things worse. I’d give it away if I knew someone who wanted it.” Well, I knew a place where this venerable old girl would find a welcome home.

I called rose and explained what I had in mind. “All we’d have to do would be to move this piano to the children’s home. The crew could also remove that old upright and we could dispose of it. I’ve tested the piano and it’s in good shape.”

That was Monday morning. On Thursday, the moving crew collected the mirror piano and delivered it to the children’s home. They took the old wreck away. I tuned the piano and it did sound fine in that room with its high ceiling and lively acoustics.

The director must have thanked us a hundred times for the new instrument. At least, it was new to them. As I sat waiting for my driver, the director sat down and played the piano. In no time, the room was filled with children. They came from everywhere. Soon, I heard the children singing an old nursery rhyme. “Mary had a little lamb” filled the room and drifted down the time worn hallway. As I went out the door, a happy grin was on my face.