Shakespeare in the Buff 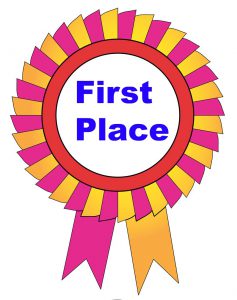 ” There is flattery in friendship.”  -Henry V

They considered each other as friends and shared a love of reading recorded books from the National Library Service, NLS, yet, they had never met in the flesh. As fellow authors in the same writing group, Donna and Kate’s friendship began in 2010. Throughout 2013, either Donna, as secretary,  or Kate, as editor, reached for the phone to collaborate with each other on almost a daily basis and applaud, praise, or fret, about details of  their writing group’s soon to be published anthology, Behind Our Eyes: A Second Look.

“This is a way to kill a wife with kindness.” (The Taming of the Shrew)

“Yes,” David echoed back, as Donna presented him with their opportunity to fly to Colorado and meet Martha Harmon Pardee, her favorite talking book narrator whose narrations numbered over 2,888 books for NLS.

Martha, her e-friend of several years, had planned to meet with them for a brunch at The Buff Restaurant prior to Martha’s 12:15 p.m. curtain call for the Shakespeare play, “Henry V.”

“I love you with so much of my heart that none is left to protest.” (Much Ado about Nothing)

Credit card points for the flights, hotel points for the room, and discounted car rental fees, were instantly activated to lock down reservations, as Donna heard the yes reply. Like Tigger on too much caffeine, Donna bounced with joy to share their anniversary trip news with the Chamberlin’s from up-state New York.

“Oh, Dear Gussie,” said Kate. “We can’t pass up the opportunity to meet each other and Martha Harmon Pardee, our favorite talking book narrator, too!”

As a little girl, if Kate felt sad, happy, or hurt, her Pappy, a Rutgers University Shakespearian educator, would have a quote from Shakespeare to fit the situation. Though, reading the manuscripts in black and white print or listening to the recordings put her to sleep, Kate wondered if she’d been able to read the original 1620 Shakespeare folios, printed in different colored inks for each character’s lines, would the plays have come alive for her?

Kate and her husband, Dave, began their trek from Rochester, NY to Boulder, Colorado with a very early morning flight, yet, due to delays, missed connections, and a variety of other snafus, they didn’t arrive at the new Hyatt Hotel until late evening.

“All hell shall stir for this.” (Henry V)

“But, I just showered and am ready for bed,” said David as Donna hung up from Kate’s late arrival call.

“It’s okay, babe, I won’t be too long. You can meet them tomorrow morning.”

Rounding the hallway corner in the Hyatt-Boulder hotel, Cruiser guided Donna to the elevator door. As Donna searched the walls to locate the elusive buttons, she heard something familiar. With excitement, she held her breath as she waited to meet the friends behind the voices that she’d known for five years. Dave and Kate, along with Kate’s guide dog, Tulip Grace, turned the corner and then, the tail-wags and greetings began. After Dave aided with the elusive button location on the elevator’s door frame, Donna pushed the down button and reminded herself to trust her dog. The party glided down and stepped out into the hotel lounge.

“If music be the food of love, play on…” (Twelfth Night)

The next morning, steam rose from the day’s first cups of coffee, as Dave, Kate, and Tulip Grace met Donna’s husband David in the hotel’s breakfast nook.

“Today’s the day! I’m so excited that we finally get to meet Martha,” said Donna, as she savored the coffee’s aroma.

“Hold that thought. You may think different, once we go hiking in the mountains,” chuckled David.

“I count myself in nothing else so happy, as in a soul remembering my good friends.” (Richard II)

“Eat in The Buff? I dare you,” said David, as Donna, Kate, and Dave, awaited Martha’s arrival in front of the restaurant.

“Wow, it’s so nice to finally meet you in person. This is my husband David, and my dear friends, Kate and Dave Chamberlin.”

“Table for Chamberlin,” announced the hostess, as the party of five navigated through the crowd to their table.

As Martha began to read the menu out loud, Donna grinned in thought, “Hmmm, should I ask her to read it as Roarke, the Irish billionaire from the (In Death) series?”

That Sunday brunch at The Buff restaurant with Martha, started the friends Shakespeare experience with plenty of lively conversation and delicious food in a friendly ambiance and clear Colorado air.

After two hours of wonderful conversation and food, Martha’s 12:15 curtain call beckoned and brunch ended in a flurry of hugs.

“After my costume change, I’ll meet y’all out front,” said Martha, with another hug goodbye to Donna and Kate.

Minutes later, Donna reached for her iPhone as Siri announced two emails from Martha that warned of two events in “Henry V” that might disturb Cruiser and Tulip Grace.

Navigating through the sold out crowd in the Colorado University theater, the four friends found their front row seats. With the stage only 15 feet away, Kate and Donna wrestled with not trying the Braille method to explore the actor’s costumes as they stood in front of them to say their lines before continuing onto the stage. When the gift from the King of France to Henry V was opened, Kate thought that Tulip Grace might try to get some of the tennis balls, but she was well behaved. Donna flinched during the loud cannon fire, but Cruiser remained asleep, until all the tennis balls bounced across the stage. With no escaping tennis balls to fetch, Cruiser’s head lowered with a resounding sigh.

Among the various roles Martha played in “Henry V” were a soldier’s bawdy wife and Katharine’s gentle woman’s hand-maid, Alice. Laughter swelled throughout the audience, as Alice tried to teach French Katharine the English names of body parts.

“Boy, that fight scene was loud; it was hard to sleep through or follow,” David said with a cocked eyebrow and grin, while they waited for Martha after the show.

Beaming with smiles, Donna and Kate posed with Martha for several photos and exchanged goodbye hugs before the next show.

“Break a leg!” said Kate, as Martha turned to leave.

“Absolutely, and thank you!” replied Martha.

“A horse! A horse! My kingdom for a horse!” (King Richard III)

“Sorry, baby, but one Shakespeare play is enough for me. I’ll go hiking while you, Kate, and Dave, go to the next show. Afterwards, we can all meet for supper.”

Cruiser and Donna followed Kate, Tulip Grace, and Dave through the sidewalk maze and reached the CU Amphitheater to attend “Much Ado about Nothing.”

Donna, with Cruiser tucked under her legs, sat in an aisle seat. Tulip tucked in under Kate’s seat and Dave narrated the action and facial expressions from the seat left of Kate.

As with all Shakespeare plays, scenery is kept to a minimum and presented “in the round, while actors invite the audience to fill-in with their own imaginations. At times, unwitting audience members were brought into the action and dialogue. As was the case when an actor, during “Much Ado,” stopped next to Donna and Kate to indicate they were virtuous women”.

“Thank you, my lord,” hung on the tip of Donna’s tongue, as she and Kate smiled at the actor.

“The deep of night is crept upon our talk and nature must obey necessity.” (Julius Caesar)

Drink glasses clinked around the BJ’s Brewhouse table in cheers, as the four toasted their friendship and reminisced about their quick, but awesome, Colorado anniversary adventure. Meeting each other for the first time and sharing live Shakespeare performances with Martha, a consummate professional, will be their shared and treasured memory.

“Good Night, Good night! Parting is such sweet sorrow, that I shall say good night till it be morrow.” (Romeo and Juliet)

Kate Chamberlin, B.S., M.A, and her husband have raised 3 children plus 2 grandchildren. Her teaching career continues through her Study Buddy Tutoring Service, Feely Cans and Sniffy Jars Program, and as a popular lecturer. She is a published children’s author, Anglican educator, freelance writer/editor, and proud grandmother. Visit www.katechamberlin.com.

Texas author, Donna Grahmann, can be found in Magnolia, enjoying life with her husband, her guide dog, and their barn yard of assorted critters. She was a finalist in the Pen To Paper writing contest with her short story, ”Dependable Pal” and a second place winner with her poem, “Supercalifragilisticexpialidocious” in the “Magnets and Ladders” poetry contest. Enjoy Donna’s other published works found in previous issues of “Magnets and Ladders”, as well as in the 2013 anthology, Behind Our Eyes: A Second Look, available at Amazon.com.