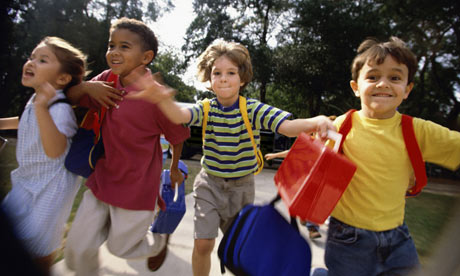 I received a great report from my daughter’s kindergarten teacher this morning. Not that it was a surprise, but good to hear nonetheless. The teacher came over to me as Grace was busy putting away her coat and backpack in her cubby. She said, “Grace is such a great kid. Her reading skills have just skyrocketed in the last month. She is really getting it. And all the kids love her, I’ll be sad when she moves on to first grade.”

Beaming with pride I thanked her, made some small talk and hugged Grace before walking my son to his third grade class. There I was greeted by a rousing “Hello Mr. Kuell!” from his teacher.

“Did Nick tell you he was the multiplication King?”

I informed her that indeed he had, and then I gave him a hug and was on my way. Heading down the long hallway towards the door, I heard a small voice to my side say “What’s that?”

Hearing no other response, I assumed the kid was talking to me. “This thing?” I responded. “This is my cane.”

“What’s it for?” asked the inquisitive voice.

Knowing I only had a minute before reaching the exit, I gave the simple answer “My eyes don’t work. I use the cane to feel where I am going.”

“You can’t see anything?” asked the astonished youngster.

“Nope, nothing,” I answered.

“Oh” said the child. A few steps later the kid gave me a cheery “Bye.” I bid him good-bye, and then headed out of the school into the fresh air.

When I lost my sight four years ago, I never could have envisioned such a pleasant drop off. Amid the anxiety of losing my sight, my job and career, I felt helpless regarding raising the children.

When my daughter was born, I was blind in one eye but the other could see what a beauty she was.  By Christmas that same year everything was a blur for me, I couldn’t really make out what gifts were what. For the first time I couldn’t see the joy on my kids faces as they opened their loot. My vision was really going downhill. I needed surgery on my “good” eye a few months later, and while I was hopeful there was still lingering doubt. On the day before the operation I tried to hold my daughter still and I got about 4 inches from her face to try to see her as best I could. Being a kid, she thought I was playing so she squirmed and rolled and I never did get a good look at her. My son had just turned five at the time, and he was a little more cooperative. That was the last time I ever saw my children visually.

So how does one move from this heart wrenching melodrama to the nice morning I had today? How can a blind parent help to educate their children and give a positive impression to others? It’s not that hard. The answer is through persistence, creativity and a positive attitude.

You have to believe you can do it. This is fairly logical – thousands of other people do it every day. You have to work at the essential blind skills, they are necessary to do what you want to in life, plus mastering them will build your confidence for tackling new stuff. And you have to be creative. Unless you have a blind friend at your side 24/7, you are going to have to figure stuff out on your own. Remember, necessity is the mother of invention.

My wife and I both worked with our son to teach him the alphabet and basic phonics, and at age four he was beginning to read simple things. Now he excels at all his schoolwork, which we attribute to his early reading. So when Grace turned three I tried to figure out a way that we could give her the same head start. I took some old business cards and wrote a letter in bold marker on the back of the card. I used my slate and stylus to make the letter in Braille, so in effect I made blind friendly flash cards. We used to play games where she would memorize the letters. After she got the upper case letters down we did lower case and started working on sounds. This took a while longer, but soon she caught on. A year or so ago I started making word cards, emphasizing families of sounds. For example, at, cat, bat, rat and sat are the “at” family. We would also work on the basic, much encountered words like the, and, but, you etcetera. In time she developed a good sight vocabulary. My wife and son would read with her often, and together we listened to books on tape.  As her teacher said, in the last month everything is really starting to click and she is reading.

Basic addition and subtraction were taught to both my son and daughter at the kitchen table and in the bathtub. I started by having them learn to count–fingers and toes, crackers, whatever. Then in the kitchen I’d give them a few grapes, have them count them, then give them some more and count again. This quickly evolved into an addition game. After that came subtraction. If I gave them 12 cheese doodles, and they had eaten eight, how many were left? This stuff was reinforced during bath time, where I quiz them with problems and they try to answer both correctly and quickly. My son is very good at doing math in his head, while Grace is still relying on her fingers a lot. But that is OK; she understands the concept and can do problems more and more with out manipulatives.

By a combination of a lot of innate intelligence and bathtub grilling Nicholas has memorized the multiplication table and now reigns King of the third grade.

Finding games to play with kids takes a bit of imagination and a lot of patience. Playing with cars and trucks, setting up blocks and bowling them over with a tennis ball just came naturally for me. Doing arts and crafts is a little trickier, but I have a sighted memory of most things, so with a pad of colored construction paper, some scissors and white glue we can create just about anything.  Both of my kids and I love playing cards, which is possible using Braille playing cards. I don’t know too many card games, and I soon became weary of Go Fish. So at a very young age my kids learned how to play poker and Rummy 500, which provided a natural opportunity to once again work on their math skills.

The possibilities for learning and having fun with kids as a blind or visually impaired adult are limited only by your desire and imagination. My kids are well-adjusted, smart and overall just great people. They bring me a great deal of pride, and have helped me in so many ways to become a better person. I honestly believe I would not have come as far as I have if not for the challenge of being a good Dad to Nick and Grace. To them I’m not a blind guy or the man with the long white stick; I’m just their Dad– and a very lucky one at that.

Chris Kuell is a writer, editor and advocate living in Connecticut. A former research chemist, he lost his sight as a result of diabetic retinopathy. He learned how to use a computer with speech output and turned his efforts to writing. His essays and stories have appeared in a number of literary, and a few not-so-literary, magazines, journals and newsletters. He is also the editor of “Breath and Shadow”, an online literary journal of disability culture and ideas.